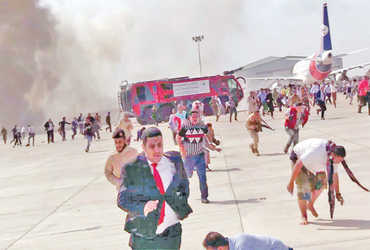 A sharp explosion has shaken the Adan airport in the Arab country of Yemen. After which 3 people have died. The bombing occurred shortly after noon in front of a crowd of 2,000 as a new government plane from Saudi Arabia to Yemen landed. The plane exploded very closely.

The Yemeni government claims that the Houthi rebels were responsible for the attack. The aim of which was to blow up the new government of Yemen. The bombing occurred shortly after noon in front of a crowd of protesters, including Yemen’s new Prime Minister Min Abdul Malik. The plane had just crashed and crashed. Although civilians present at the airport were killed in the attack during this period, the prime minister and his ministers on the target survived. Those were later taken to a safe place.

The number of injured in this attack is around 40 to 50, so the death toll can also increase. Photos and videos of the entire incident are going viral on social media. Yemeni President Abed Rabbo Mansuri, who lives in Saudi Arabia, recently reshuffled the government, saying that the current Yemeni government has the support of Saudi Arabia, while the Yemeni rebel Houthis have the support of Saudi Arabia’s anti-Iran. The Yamani airport is believed to have hit a missile fired by Houthi rebels.