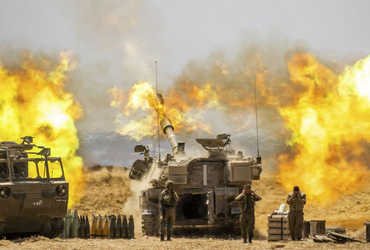 Israel is known as a country, but what is Hamas?

The answer lies far behind in history. But we all know that Hamas is an abbreviation of an organization called Harkat al-Mukama al-Islamiyah.

This organization works for the liberation of Palestine

So what is this Palestine?

It was once considered to be a country with an Arab population. When the Second World War ended in 1947, the area was under British occupation. On the other hand, Jews were migrating from Europe. Therefore, it was decided to give him this land to settle. It was voted on in the United Nations, which ruled that the city of Jerusalem should belong to both Arabs and Israelis, in addition to the establishment of Israel.

The Jews accepted the verdict, not the Arabs. The Jews settled on the land they had acquired as Israel and have been at war with the Arabs ever since. The Jews could not completely drive out the Arabs together, but the Arab population was limited.

Today, that limited population is divided into three parts: the West Bank, the Gaza Strip, and East Jerusalem. The region is also internationally known as the Palestinian Territory authorized by some countries. There are several organizations, including Hamas and Hezbollah, who attack Israel when given the opportunity.

Israel has no objection as long as the Arabs live in the Gaza Strip, the west coast, and the eastern part of Jerusalem city. But terror continues to spread in those areas.

Now the cause of the current headache is brand new. There is a small settlement called Sheikh Jarrah on the border of Palestine and Israel. On 6 May, an Israeli court was to rule on whether Palestinians could remain.

Protests erupted before the verdict, believing that Palestine could not survive, so Israel gave a one-month deadline. But by then the protest had started, which has increased now.

Many countries, including Iran, have favored Hamas-Hezbollah or other anti-Israel groups. Hamas wants to liberate it and establish Palestine there. So the conflict between Israel and Hamas continues.