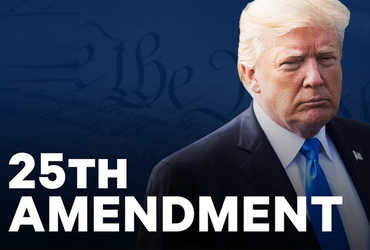 -This provision is a step to remove Trump immediately: Democrats themselves agree on this point

In the wake of Thursday’s violence and sabotage of Capitol Hill by supporters of President Donald Trump in the United States, the move to remove Trump before his term ends under the 25th Amendment of the US Constitution has intensified. If this constitutional amendment could not be implemented, Trump had to agitate for impeachment.

Spiro Agnew, the then Vice President of the United States, resigned in 1973. The amendment at the time made Richard Nixon the new vice president. Richard Nixon later became president. However, Gerald Ford became the first vice president under this constitutional amendment. Article 3 of the 25th Amendment allowed the President to delegate all his responsibilities to the Vice President. This provision came into force in 1985 when the then President Ronald Reagan underwent bypass surgery. Reggie handed over his responsibility to the Vice President. In 2002 and 2007, when President George W. Bush was given anesthesia, the same clause was implemented.

Article 4 of the 25th Amendment provides that if the President fails to transfer or discharge his responsibilities, he can be removed from the presidency. Till now this clause has never been used. But now it seems that using this clause, Trump may be removed before the end of his term.

It can be declared by a majority of the country’s vice-president and cabinet that the president has failed to discharge his responsibilities to remove him. If the president opposes the motion, a two-thirds majority will be required in both houses of parliament.

Then the President can be removed by handing over the responsibility to the Vice President. The only assurance for Trump is that the amendment does not elaborate the criteria under which the president can be declared incompetent. Some leaders cite physical and mental well-being as the reason for this, while others have emphasized a wider view of the issue. Let’s see what happens next in Trump’s case.

Some experts in American politics were also considering filing a lawsuit against Trump.