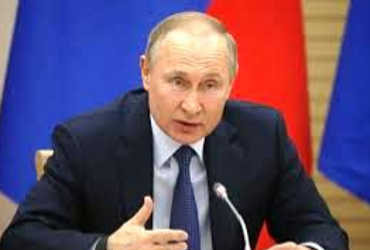 Russian President Vladimir Putin said, “In the new year we will increase cooperation with India to strengthen Russia’s relations with India.”

Putin’s remarks are a setback for China, which has recently said relations between India and Russia have soured.

Putin said that Russia will increase cooperation with India on regional and international issues and will take steps to increase cooperation towards common issues. Wishing Merry Christmas and New Year to Indian Prime Minister Narendra Modi and President Ram Nath Kovind, Putin said that despite the Coro epidemic and many other challenges, Russia and India were making steady progress. Friendship and cooperation between the two countries was unbreakable.

Putin said that the two countries are continuing extensive political dialogue and increasing constructive bilateral cooperation. They were making joint efforts to solve various problems locally and internationally. Following the cancellation of the proposed summit between India and Russia in the wake of Corona, China launched a campaign that soured relations between India and Russia. The relationship between the two had soured.

Meanwhile, as cooperation between China and Russia is growing, political critics have expressed the view that India was in a position to worry. China was expanding cooperation with Russia. On the one hand, China was increasing its penetration in India’s neighboring countries like Pakistan, Nepal, Bhutan, etc. On the other hand, it was supporting Russia, so political critics believed that India was a warning. Now it can be said that Putin’s statement made the situation clear. Putin’s statement also falsified China’s propaganda.