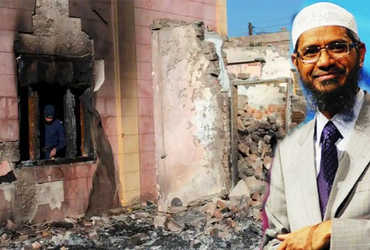 Wanted religious leader Zakir Naik in India has once again justified the demolition of a temple in Pakistan by making a venomous statement in his latest video.

Zakir Naik has said that temples should not be allowed in an Islamic country when a Hindu temple in the Khyber Pakhtunkhwa province of Pakistan was recently demolished and widely criticized worldwide.

In Pakistan, a local cleric incited a mob and a mob of about 1,000 demolished a Hindu temple and set it on fire. His clip also went viral on social media. Speakers made inflammatory speeches at a rally here and caused the mob to attack and vandalize and set fire to the temple.

India has also opposed this incident to Pakistan. However, now Zakir Naik has put ghee in the fire, supporting this heinous act.