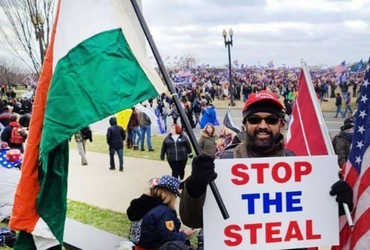 Trump supporters bombarded the US Capitol with heavy violence on Capitol Hill. Meanwhile demonstrations were taking place outside Capitol Hill. Vincent Xavier, a supporter of Indian origin who arrived to protest with the tricolor, is being hotly debated in India.

Now a man named Deepak Kumar Singh has filed a complaint against Xavier at Delhi Police Station and demanded that Javier’s Twitter and Facebook account be suspended. “I went to participate in demonstrations as a Trump supporter and not as a racist,” Vincent said.

Hashishtror @ varungandhi80
American patriots – from Vietnamese, Indian, Korean and Iranian origin, and so many other countries and ethnicities who believe that there has been massive voter fraud joined the rally in solidarity with Trump yesterday. Peaceful protesters who were exercising our rights! pic.twitter.com/aeTojoVxQh

Vincent Xavier, 54, originally from Kerala and was also elected as a member of Trump’s Presidential Export Council. Vincent later clarified that he had no hand in the violence on Capitol Hill. I went for a peaceful demonstration. My protest was against electoral fraud. The rally was not a racist movement. Otherwise I could not get involved with the flag of India.