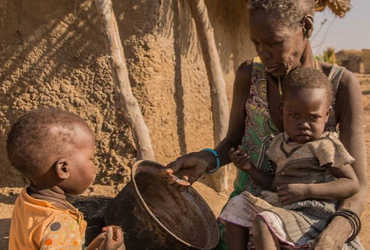 The corona virus has caused worldwide upheavals in the last one year. There is not a single country where Corona has not robbed people of its livelihood. There are some countries that were already pathetic and moved to Corona which made their situation worse. In addition, the United Nations has warned that there is a possibility of severe drought in some countries in the near future. These include Yemen, Burkina Faso and parts of South Sudan including Nigeria.

The worst situation would be in South Sudan. Violence has continued for a long time in South Sudan. Then there was flood and now due to corona the condition of the people has become miserable. People do not have a livelihood. Government machinery has also gone into a tailspin. The government does not even have money.

The Pibor County area of ​​South Sudan has suffered horrific violence and severe flooding this year. Seven families living in Lekungole city of the country told the media that 13 of their children died between February and November this year. In addition, 17 other children died of starvation in the surrounding area in just three months.

A report released by the United Nations calls for an immediate end to hostilities in South Sudan. It said that South Sudan is currently facing a “premature situation”. Which means that 20 percent of the country’s households do not get enough food. In addition, 30 percent of children in South Sudan are malnourished. However, the South Sudanese government disagrees.

Sudan is currently struggling to overcome a five-year civil war. On the other hand, the crisis has been ended by floods and corona. Constant violence and war caused starvation. The government is not at all serious about what is happening, he told the World Peace Foundation. Not only this, the Sudanese government is ignoring everything.