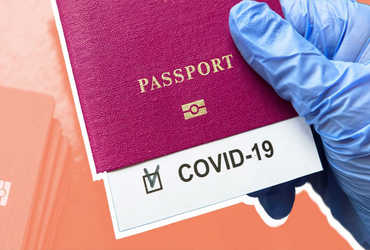 – Organizations including WHO, WEF and UNWTO are working on this passport

UNWTO appeals to all countries

Many countries have banned international tourism in the wake of the corona virus epidemic. Also, some countries have banned international travelers. So that the possibility of spreading coronary infection can be reduced. Due to which the tourism industry has been badly affected. Organizations such as WHO and WEF are working on a vaccine passport to address the issue. Which will be a universal passport. Meanwhile, the United Nations World Tourism Organization (UNWTO) has demanded that countries around the world apply for a vaccine passport.

What is a vaccine passport?

Some countries allow international travel by following all regulations. It includes rules like 14 days quarantine for tourists. Due to which people do not travel, which has an impact on the tourism industry. The vaccine passport can tell if the passenger has been vaccinated. This passport will be available only to the vaccinated person. The UNWTO and the Global Tourism Crisis Committee met recently in Spain. It was decided that the vaccine passport should be included in the necessary travel documents. According to the UNWTO, people will be certified as soon as they are vaccinated. So that they can travel.

Passport has been in operation for 6 months

Several international organizations, including the WHO, have been working on the Common Trust Network for about 6 months. Their aim is to develop a universal device that can tell if a person moving from one country to another has been vaccinated. Under which the vaccine passport will be finalized. The WHO has to play the biggest role in this case, as they have to do data processing.

The WHO will list such organizations worldwide. Who will issue an e-certificate of corona testing and vaccination. These organizations have to provide the WHO complete information about people traveling internationally. The vaccination certificate, corona test and vaccine passport should also be uploaded on the WHO portal. WHO will check whether this certificate and passport are authentic. The passenger’s QR code will then be known, which they can use to travel.