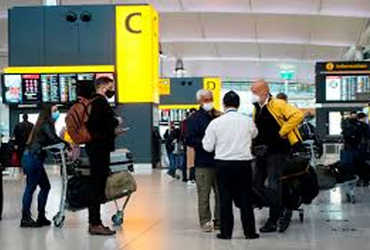 A version of South Africa has also appeared in the US, but a version of the UK has appeared in several states. Last week, Biden ordered federal agencies to release all air travelers arriving in the US, and those two years and older must have received a Corona Negative Certificate three days before the trip.

Google has announced the opening of large-scale corona vaccination centers at its locations in the US and promises to use 150 150 million for its uniform distribution to encourage vaccination.

The British, who have been living in a lockdown for the last three months, are hopeful that their sacrifice will bring the Corona epidemic under control. But despite stringent restrictions, the number of corona cases has not decreased.

In contrast, experts and the government have warned that the fight against the Corona epidemic may go on for a long time. A virus version called B.1.1.7 has caused uproar in the UK. A total of 1,31,143 new cases of corona were reported worldwide, with the total number of corona cases being 99,887,660, while the total deaths with 3,000 deaths increased to 21,41,380.

Meanwhile, Japan added 197 to the number of deaths in its home from the Corona epidemic in December and January. Today another 5 million vaccines arrived in the air after two million bottles of the Kovishil vaccine sent as a gift from India.

India has sent Bhutan, Maldives, Nepal, Bangladesh, Myanmar, Mauritius and Seychelles as grant support and Corona vaccines to Saudi Arabia, South Africa and Brazil as commercial supplies. The Corona vaccine made by the Synovac company, which was sent to Brazil with an efficacy of 78 percent, is actually only 50.4 percent effective. The amount of publicity has increased since the opening of this Bhopal.

Mexican President Andres Manuel López Obredor has contracted a corona. Announcing this on Twitter, the President said that the symptoms are mild and I am currently undergoing treatment. As always I hope we all move forward. Lopez, 67, never wore a mask in public like US President Trump and continued to travel on commercial flights.

Virus from America: China’s new past

A Chinese government spokesman said the source of the corona virus was an American military laboratory in Maryland. These theaters have been flooded by the Communist Youth League. A Chinese writer from the US, Fang Shimin, said that he blamed the US government for not controlling the epidemic in the early days. This strategy is successful due to anti-American sentiment in China.