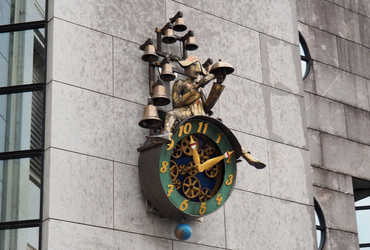 The date usually changes when the clock strikes 12 o’clock at night. In this way the date changes throughout the world. But imagine what will happen if the clock is not past 12? You must be wondering if this is crazy, every hour at 12 o’clock. But here is your fault, there is a clock in the world that never rings 12. No, the clock is not stopped but it is just starting and the whole city sees time in it.

This strange clock is located in the city of Solthorne, Switzerland. The city has a clock on the wall of the city square, which has only 11 digits. The number 12 is not even inside the clock. There are other clocks in the city that do not strike 12. The biggest feature of this city is that people here are very fond of number 11. All the things in the city are public spaces, all of which are associated with design number 11.

There are 11 church wines within this city. Apart from this, there are 11 museums, 11 fountains and 11 tallies within the city. There are also 11 gates inside the main church of the city. It is said that it took 11 years to build this church. There are three staircases inside the church and each has 11 staircases. Number 11 is so special for the people here that they also celebrate their 11th birthday. Gifts are only given on this occasion, it is also associated with number 11.

The reason for such an attachment to the number 11 is the age old belief. It is said that at one time the people of the city of Solomarth worked hard. Still there was no happiness in his life. After a while Yogini started coming from the hilly area of ​​the city and his enthusiasm increased. So that there will be happiness in the lives of the people there.

The elf is now mentioned in German mythology. Elf are people who have supernatural powers. In German, elf means 11. So the people of Solomarth give so much importance to number 11.