When it comes to the printing sector, innovations and advancements have come at a modest pace over the past few decades. However, the tectonic shift from traditional printing including screen printing and offset printing toward digital printing was one of the most astounding changes within the sector, which in turn, transformed the graphical art space. The advent of digital printing technology paved the way for niche printing segments due to which, self-adhesive vinyl films came under the spotlight. The digital printing sector is experiencing a considerable amount of growth worldwide and with it, the demand for self-adhesive vinyl films is also moving in the upward trajectory. 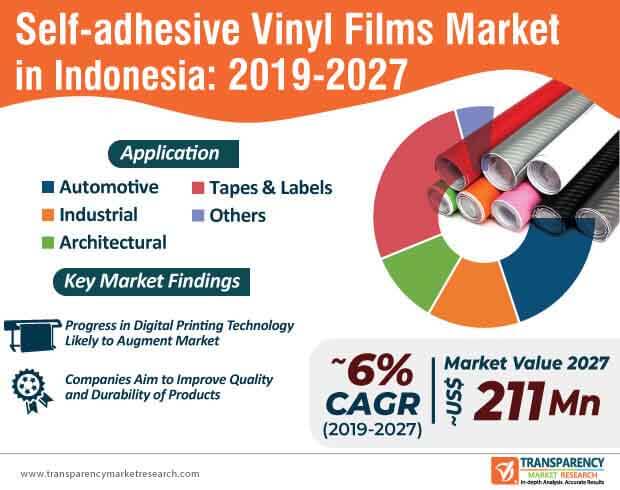 The advertising industry has evolved at a rapid pace during the past decade. The slow and gradual transformation of the advertising sector offered companies tremendous scope to create captivating outdoor and indoor marketing campaigns. Due to the fast-paced urbanization of cities across the world particularly in the Asia Pacific region, infrastructure development projects have gained considerable momentum. The rise in the number of shopping malls and other commercial spaces has compelled manufacturers operating in the self-adhesive vinyl films market in Indonesia to improve the flexibility of their printed materials that adapt to various architectural elements.

Over the past decade, the car wrapping technique has emerged as one of the most effective techniques to conceal scratches– a trend that has triggered the customization wave in vehicles worldwide. In addition, the growth of the digital printing sector has augmented the demand for self-adhesive vinyl films and also opened up the possibilities for limitless innovations in the graphic space. Significant developments in the sign making tools over the past few years have had a direct impact on the demand for self-adhesive vinyl films in recent times– a trend that will continue over the entirety of the forecast period. Within the Indonesia self-adhesive vinyl films market, applications in the automotive sector and development of tapes & labels will remain higher than other applications such as industrial, architectural, etc.

The self-adhesive vinyl films market in Indonesia is largely dominated by tier 1 and tier 3 companies that account for ~ 70-80 percent of the total market share. While product pricing and improving the quality of their products continues to remain some of the key areas of focus for most market players, on the flipside, several companies are increasingly inclining toward expanding their product portfolio and launching new products to strengthen their foothold in the current market landscape.

The soaring demand for outdoor and indoor signage presents abundant opportunities for market players involved in the current market for self-adhesive vinyl films in Indonesia. Innovations and the launch of new products are expected to gain momentum periodically during the forecast period. Recently, in May 2019, HP expanded its product portfolio by launching the HP Adhesive Vinyl for print and cut applications. Companies are expected to improve the durability of their products and launch self-adhesive vinyl films that are easy to install.