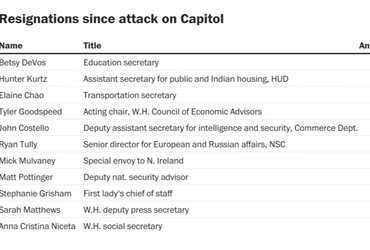 A series of resignations has begun in the Trump cabinet after US President Donald Trump incited his supporters to attack Parliament on Wednesday. Trump’s two cabinet colleagues, Education Minister Betsy Davos and Transportation Minister Ellen Chao, resigned with immediate effect. In the past two days, 11 ministers have resigned from the Trump cabinet. Four ministers resigned Wednesday after Trump supporters attacked Parliament. On Thursday, Hunter Kurtz, Assistant Secretary of the HUD for Public and Indian Housing, Taylor Goodspeed, Acting Chairman of the Economic Advisory Council, was Deputy Assistant Secretary for Intelligence and Security in the Department of Commerce. .