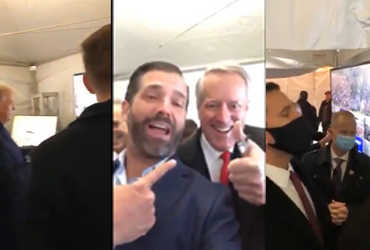 Violence by supporters of President Donald Trump, who is bidding farewell to America in the US Parliament House, has caused worldwide commotion.

Political parties and the public in the United States have been shocked by the incident, and a video has surfaced showing members of the Trump family watching the violence in Parliament House and dancing happily. The video features Trump’s son, Trump Jr. Have also seen shooting.

However, after the video went viral on social media, the anger of US citizens has erupted. Trump, Ivanka and others are appearing in the video. Trump Jr. is heard saying that people are getting ready to go there and that these demonstrators are patriots.

Although Biden won the election in November, he was not ready to lose to Trump at the time. His claim that the election was rigged was also rejected by the court. Attack was uttered.

The crowd of Trump, Donald Jr., Kimberly Guilfoy and others were seen firing for hours before they surrounded the Capitol, and were dancing in joy while the song was playing Gloria. Seems portentous, no? pic.twitter.com/E6tHufOjiN