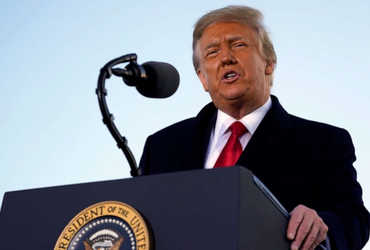 Farewell President Donald Trump made the final speech interesting by saying that we would come back in one form or another. Trump said I just say goodbye to you but this goodbye is not long. He greeted the newly elected President Joe Biden without naming him, suggesting a bitterness between the two. According to the information received, he addressed it in an original way, rather than a script speech given by White House staff. Before leaving the White House, Trump said goodbye, it was an honor for him to become president. Achieved a lot in a four-year term and cited the corona epidemic as a vaccine-producing feat in just 6 months. Trump, who has been strict on China throughout his term, called the Corona virus a China virus.

The president, who usually leaves the White House, welcomes the incumbent, but some say he will return in some form, with some speculating that Trump may run for office in the next five years. Trump is age-appropriate but younger than the elected nine president Joe Biden. Trump himself and his party may try to keep Trumpism alive until four years are more. After Joseph Biden took over the reins of the United States, Trump worked to unify the United States as promised by giving policies to Zakara.

Even though Trump may have broken the US in six years, it is not easy for Biden to unite the United States. If Biden goes to try something new by rejecting Trump’s policies and decisions at the beginning of his term, Trumpism will have a chance to revive. Fear of radical Islamic terrorism should be shown as sternly in the minds of the people. The Biden administration needs to be very careful in strategizing to get America out of the Corona epidemic, as well as in changing the policies that Trump has made to make America great.