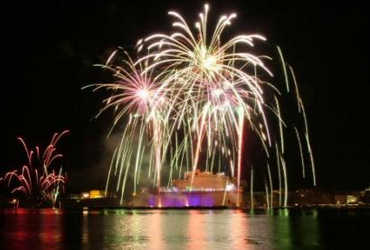 The first arrival of the new year in the world occurs on an island in the South Pacific called Samoa (Apia). According to the time zone, New Year 21 is celebrated after 12 pm. According to which the first Noor sits on this island. When the region celebrates the new year, it is 9 in New York and 10 in London. So there are often new year wishes. After Samoa, the New Year celebration begins on Chatnam Island, New Zealand. The capital, Wellington, has great new year glory. Shortly afterwards, the new year arrives in Tokelua, Fiji, Tonga, Antarctica, the South Pole, Scott Station, Kiribati and Chronicus Island.

The island of Samoa Apia, with a population of 2 million, is connected to the Asia-Pacific region by trade and cultural and political ties, and it follows the Asia-Pacific timezone, while Samoa Pego Pego Island is culturally connected with the United States , Is associated with trade and political relations. Along with celebrating the last day of the New Year in the world after American timezone since US control. Thus changing the time zone celebrates two Newers on the island of Samoa.

New Year greetings in the United States begin in Washington DC, Miami, Boston, Atlanta, Detroit, Indian Police, Baltimore, Philadelphia, and Virginia. In addition, countries like Cuba, Havana, Peru, Colombia, Jamaica, Ecuador, Brazil are also involved in New Year’s parties. Los Angeles and Chicago also join the one-hour drive, but the last New Year is celebrated in Honolulu, Adaque, Cook Island and French Polynesia. While there is a day difference between Samoa APA and Holalulu. On the eve of the new year, this year there is less congestion in the wake of the Kovid epidemic.