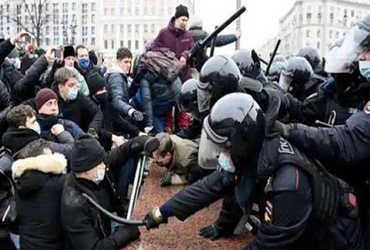 People are opposing Russian President Putin even in Russia at -51 degrees cold.

Protests began in Russia on Saturday in support of Alexei Navalny, an ardent critic of Putin and the opposition leader. Protests began in Siberia as well as in Siberia. Around 350 people demonstrated in the bitter cold. All were detained. Which also includes Navalny’s wife Yulia. Navalny was detained shortly after his return from Germany last week.

However, the Russian people are opposed to the action of the Putin government. Protests are taking place in most cities. In some places, including Siberia, people are protesting in minus 51 degrees cold. Around 40,000 people are said to have taken to the streets in protest. However, police said the number was 4,000. Some people were also beaten with sticks by the police.

Hatdekhavom threw snowflakes at police demonstrations on Moscow Square, compared to Bhagadya Hatketlake Puskina, will be re-released in Russia and is a thief looking at Putin’s poster….