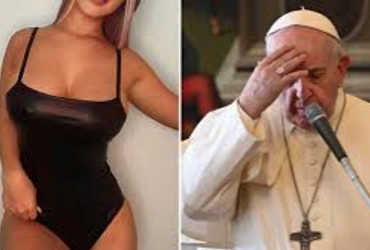 Roman Catholic clergy Pope Francis was involved in controversies around Christmas Day and Friday on 25 December. He caused controversy by ‘liking’ a model on his Instagram account.

Margot also produced a screen shot to show that she is not lying.

Earlier, Pope Francis was the subject of controversy for liking a photo of a model wearing a bikini.

The controversy erupted after Margot, wearing a black swimsuit, a screen shot was released and was criticized by many devotees. With Christmas and New Year, such controversy may escalate. A photo of Margot Fox and the screenshot she presented went viral on social media.

This is the second time in the past month that the Pope has caused controversy by liking a beautiful model in this way.