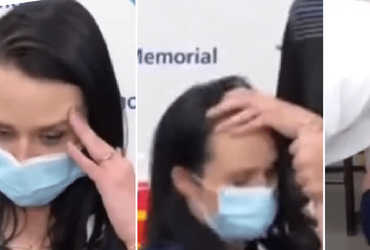 – Tiffany Dover works as a nurse in a hospital

Tiffany Dover, who works as a nurse at a hospital here, lost consciousness shortly after receiving the Corona vaccine.

The details of which company Tiffany was given have not been released. But after taking the first dose of the vaccine, Tiffany was going to a TV channel when she felt dizzy and faint. Immediately the doctors present began treating her, and within minutes, Tiffany regained consciousness.

In Alaska, another health worker was given the corona vaccine, causing swelling in her eyes. He also complained of dizziness and felt a type of sore throat. He was also discharged after a few hours of treatment in the hospital.

It may be recalled here that Anil Vij, a leader in India, tested positive for Corona fifteen days later and was currently undergoing treatment at Medanta Hospital.