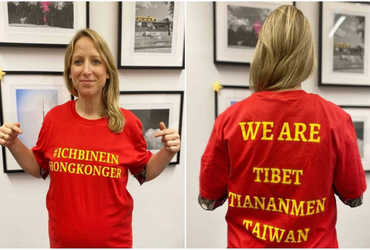 German female MP Daniela Clarkert has shared a picture of herself on social media in support of the demand for the establishment of democracy in Hong Kong, Tibet, Taiwan. In the same post it is written that in the picture a German MP is seen wearing a red T-shirt.

The front of the T-shirt reads “I am a Hong Kong” in German, while the back reads, “We are Tibet, Tianmen, Taiwan.” He also wrote in his post that freedom, democracy and human rights are not in China, certainly Clarkeart’s post will not be liked by China at all.

“Freedom, democracy and human rights are all very important to us, which is not the case in China,” he wrote in a Facebook post.

The aggression with which China is acting against other countries is frightening, as evidenced by recent actions against Joshua Wong, Agnes Chow and Ivan Lam.

We must fight even harder than before so that the people of Hong Kong, Tibet and Taiwan can live in a democratic state without fear.

Daniela Clarkert is a member of the Free Democratic Party of Germany, a proponent of Taiwan’s participation in the WHO, a supporter of pro-democracy activities in Hong Kong, as well as a member of parliament for the establishment of democracy in Tibet and Taiwan.