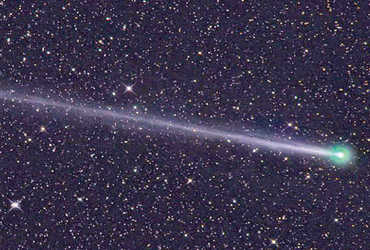 During the recent total solar eclipse in some regions, including South America, astronomers observed a rare comet passing close to the Sun. Which was destroyed a few hours after the count.

At the time of the eclipse, astronomers closely observe the movements around the Sun, and during this time they had their eye on this rare astronomical event.

According to the National Aeronautics and Space Administration (NASA), an organization associated with space research, data was collected with the help of a satellite during a total solar eclipse in Chile and Argentina. A bright light appears in Lesotho in a photograph taken at the time of solar eclipse on 14 December.

At the time of the eclipse, the comet was about 4.3 million kilometers from the Sun’s surface and, according to NASA, was moving at a speed of about 7,24,205 kilometers per hour. The comet will be about 50 feet in diameter and the length of a small truck. The comet shattered into particles due to intense radiation before approaching the Sun.

The comet was named C / 2020 S3 (SOHO) by the Minor Planet Center, which is known as the Kretz Sungraz series comet. Thousands of years ago, these small comets orbiting the Sun are orbiting the Sun.

This type of small comet can be seen in the image captured by NASA Solar and Heliospheric Observatory (SOHO). So far, 4,108 comets have been discovered using SOHO images. The Kreutz Sungzer comet, which was observed at the time of the eclipse, was at 3,524th.