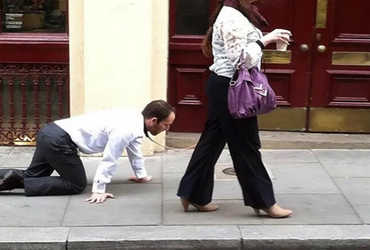 People are fed up with the curfew imposed during the Corona Crisis and keep trying to get out of the house on the new pretext, a recent incident in the Canadian province of Quebec involving a woman jerking her husband’s neck and giving him Seen kicking out. However, the police have taken action against both and have also fined them.

A four-week curfew has been imposed in the Canadian province of Quebec, which is enforced at night and is not allowed to go out between 8 am and 5 am, although the administration wants to bring the necessary items and for this time Takes his pet dog for a walk. Therefore they are allowed.

Police arrived at the scene at King Street East in Sherbok, where a woman was seen tying her partner’s neck and taking her for a walk. When the woman was questioned by police, she said she had returned with her dog, Izabel Gendron of the police department said. Was not cooperating

Police fined the woman and her partner 2,400 for violating curfew rules. However, this news has aroused great curiosity among the people.