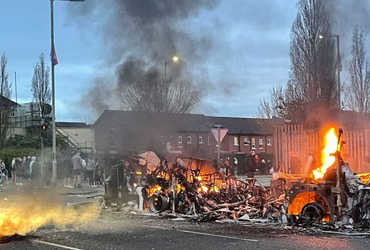 London, Ta. .
The violence erupted for the sixth consecutive day in Belfast, Northern Ireland. The protesters hijacked a bus and then set it on fire. In addition to the bus driver, a journalist was injured in the incident.
Demonstrations by loyalist groups in Northern Ireland resulted in violence. A bus was hijacked by protesters and set on fire. There were also clashes between protesters and police in Belfast, Ireland. The Loyalist group is opposing the British government’s decision on the Bexit issue.
Demonstrations turned violent. A journalist was also injured in the violence in Belfast. An official police statement said the driver of the hijacked bus was also injured.
Prime Minister Boris Jones criticized the incident and tweeted it on Twitter. This was the biggest violence in the last one year. The protesters hurled petrol bombs at the police. The police released tear gas in front of him.
The protesters have been protesting in Peace Line Street for the last five days. During the demonstrations, many people pelted stones at the police. After that the situation became more tense. A press photographer was also injured in the stone pelting.
Boris Jones stated on the issue that violence does not result in any consequences. Differences can be resolved by dialogue. It would be better to settle the dispute by negotiation rather than friction.
Ireland’s first minister has appealed to protesters to stop the violence. There should be dialogue to resolve the differences between us. Only dialogue can yield results.
It is noteworthy that the attitude of the people of Northern Ireland on the Brexit issue has already been different from that of Britain.