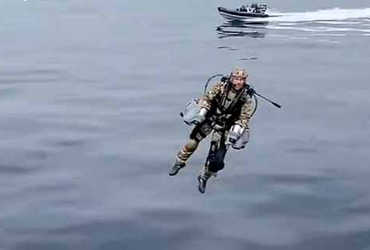 New Delhi date. 13
Britain’s Royal Navy has become the first navy in the world to have a flying jet suit. The suit is made by aeronautics company Gravity Industry. The British Navy has made history by successfully testing it.
Sailors of the British Royal Navy will now fly like Iron Man or James Bond. The Royal Navy has become the first Navy in the world to have a jet suit. The jet suit was patented by British aeronautics company Gravity Industries in 2013 and has now been successfully tested.
As Iron Man flies to the enemy in the film, it will now appear in real life. The film also featured the famous spy character James Bond flying to reach the enemy, but now the day has actually come when sailors of the Royal Navy will board an enemy ship to carry out a military mission.
This suit can fly at a speed of 30 to 40 kilometers per hour. The weight of the suit is 150 kg. A man can reach a height of 12,000 feet with the help of a suit. At present, the cost of a suit is around Rs 4.5 crore. It was tested by the British Navy in the Mediterranean Sea. The sailors flew for a designated vessel from the British Navy and from there assisted the troops stationed in the speed boat under the ship and arranged for the troops to reach the top of the ship.
Until now, helicopters were used for such operations, but had to be prepared for counter-attacks by the enemy as soon as the presence of helicopters was detected. But this suit can reach the enemy without registering his presence. The mission can be traversed as long as the enemy remains unaware. The suite is equipped with 1050 horsepower.
After this announcement by Royal Navy and Company, people called this suit a game changer in the army. It took the company two years to make this suit. The company now plans to make the world’s first manned flight a success.