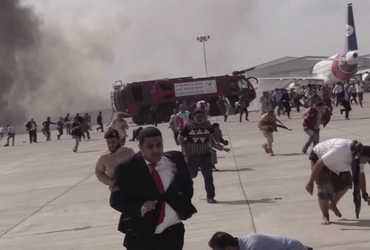 There has been a major terrorist attack in Yemen, embroiled in civil war for some time. A bomb blast near the Yemeni city of Adan has killed at least 13 people. Due to which more than a dozen people have been injured. A plane carrying members of the government’s new cabinet from Riyadh, Saudi Arabia, was bombed in the afternoon.

According to the people present at the airport, as soon as the plane landed, there was a huge explosion and then the sound of gunfire. Yemeni Prime Minister Chief Abdul Malik also appeared inside the aircraft with cabinet members. Everyone managed to get out safely. Prime Minister Maine also tweeted that all people are safe outside.

Photos and videos following the attack show debris and broken glass inside the airport building. At the same time, two bodies are also visible. Out of which one person has been burnt. Reacting to the attack, the Prime Minister said that it was a cowardly act by terrorists. Which is a war against Yemen and its people. Which we oppose right now.