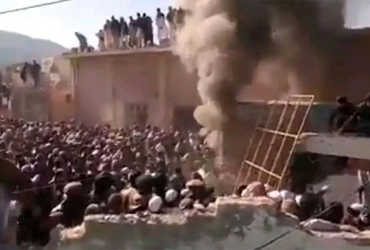 Pakistan’s anti-terrorism court sentenced 55 ISMOs to nine days in jail, including the main accused, for sabotaging a Hindu temple last week under the leadership of radical Islamic party members in Khyber Pakhtunkhwa province. The court also jailed 56 other accused, including Maulvi Sharif, for inciting the mob.

Last week, rioters stormed a temple in Terry village in Karak district of Khyber Pakhtunkhwa, seeking permission from local authorities to rebuild a decade-old Hindu temple. The Jolots demolished the new construction along with the old structure of the temple.

Police said on Friday that the main accused in the incident, Faizullah, was kidnapped from Karak district, which also damaged the tomb of a religious leader in the temple. Human rights activists and minority Hindu leaders have strongly criticized the demolition of the temple. Police have registered a complaint against 350 people involved in the incident.

The Supreme Court has ordered the country’s AWQ Property Trust Board to resume construction of the damaged temple. The court said that those involved in the demolition incident, which has put Pakistan in an internationally turbulent situation, should be charged for repairing the damaged part of the temple.