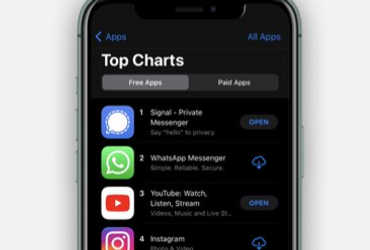 With Dadagiri named after WhatsApp’s new privacy policy and policy, its users have now turned to another messaging app Signal. For two-three days, hate on WhatsApp and love for signals has been raining on social media. Because Signal does not play with privacy like WhatsApp and does not ask for any details except mobile number. Furthermore, this application does not share mobile numbers with anyone. As a result, the signal was downloaded more than a million times in two days on the Google Play Store and Apple’s App Store.

Signal was ranked among the top 10 most downloaded apps in the Play Store and App Store due to a surge in signal usage. Signal was ranked first in the chart of the top free apps. Signal also tweeted and shared a screenshot of being on top. In some other lists, the Signal app was in the top ten. Of course, as the top-10 list was constantly updated, the situation was seen to go up and down, but the signal has already overwhelmed WhatsApp.

Another popular messaging app is Telegram. “Facebook’s WhatsApp is below us in terms of quality and privacy.” That’s why our Facebook constantly promotes that our app is not open-source, our app is Russian … etc. All of this is wrong. He said that despite the popularity of Facebook worldwide, he spent 10 billion popularity on advertising last year. But Facebook’s lies do not affect our popularity.