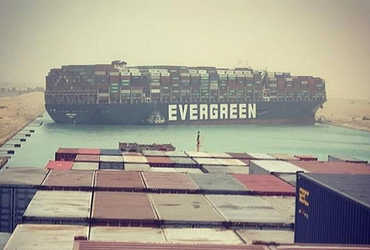 The cargo ships were stranded in the evergreen Suez Canal. The ship was stuck in the Suez Canal for a week, costing $ 500 billion. After a week of hard work, the ship opened up, but by then a long line of ships had formed on either side of the Suez.

Suez Canal Authority spokesman Osama Robbie said that both sides hope that an agreement will be reached soon. The ship will be released at a time when the company is ready to pay Egypt one billion in compensation. The Suez Canal Authority stated that there was a demand similar to the cost involved in the evacuation process. About 200 people were involved in the evacuation, and much machinery was used.

The company’s head, Eric Hesheh, said the company was free from liability for cargo delays, as this claim was covered by insurance.

The real trouble between all these arguments is the crew members trapped in the ship. Eight Indian crew members will be stuck until the issue is resolved by both sides.

The crew member was held responsible for trapping the ship in the canal. The world’s trade came to a standstill when the ship sank.