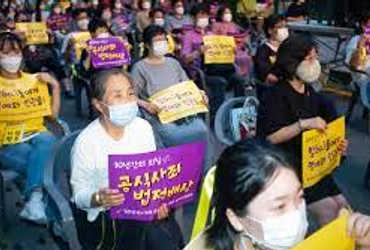 South Korean women were sexually enslaved by Japanese soldiers during World War II, they have received justice after 90 years of legal fighting.

The Central District Court in the South Korean capital Seoul on Friday ordered that the 12 surviving women be paid Rs 66 lakh each in Japan.

According to a report in London’s Daily Mail, these women were held as sex slaves by Japanese soldiers during World War II, and every day an average of fifty soldiers raped and abused other women.

Many women fell prey to sexually transmitted diseases and many other women became pregnant. The court said that making a woman a sex slave is an act against humanity. Twelve of the victims, some of whom survived, sued in a South Korean court in 2013.

However, Japan opposed the court order. Japan claimed that the issue of compensation for losses suffered during the war was resolved in 1965. However, the court stated that between 1910 and 1945, the Japanese army occupied South Korea and made women sex slaves. Therefore, despite being an independent country, Japan cannot escape its responsibility.

In fact, about one hundred and fifty women filed suit in court. Sixteen women survived. Eight of the twelve women who went to court died. Twenty other women have filed another case against Japan. The decision was expected to come this week. However, experts say Japan will not accept the decision of the South Korean court. However, South Korean women felt that the verdict did them justice. The decision came ninety years later.