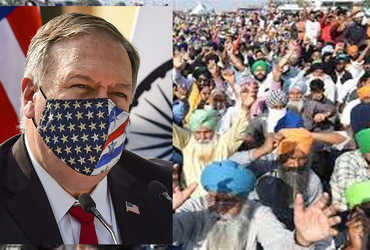 Do not spread confusion on the basis of incorrect and incomplete information about the law: India’s response to US lawmakers

Farmers in India have been opposing agricultural laws for over a month. The movement is also being discussed at the international level. After the Canadian PM, UK MPs, now US lawmakers have also supported the farmers’ movement.

Seven US lawmakers have written a letter to US Secretary of State Mike Pompeo urging the Indian government to raise the issue of farmers’ demands and agitation.

After the United Nations, Canada and Britain, now the United States is also receiving support from farmers in the movement against agricultural laws. Among the American governments that US lawmakers have pressed to negotiate are Congressman Donald Nkros, Brayden F. Boyle, Brian Fitzpatrick, Mary Gray Scallone, Baby Dingle, David Tron and Pramila Jaipal of the Indian-American Congress.

The lawmakers said that the case is affecting Sikh Americans who are associated with Punjab. This case can have the most impact on people who are Indian-Americans and are associated with various states of India. Therefore, the US should immediately take up the matter with the Indian government.

Many Indian-Americans are also affected by this because their large land is in India and their families are involved in agriculture. Therefore, we urge you to discuss and resolve this issue with the Prime Minister of India. America has been a supporter of freedom of expression and political freedom.

On the other hand, India has given a similar response to the Canadian PM, citing US lawmakers. Foreign Ministry spokesman Anurag Shrivastava said, “Some countries are making inappropriate statements based on incomplete and incorrect information about Indian farmers, which we oppose.” Such statements can have a detrimental effect on the relationship between India and that country.