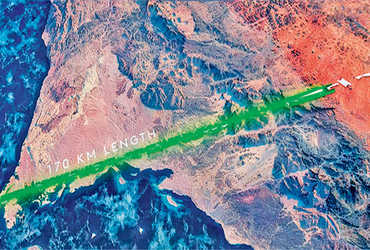 Saudi Arabia has announced the world’s first car-free city. Saudi Kunwar Mohammed bin Salama himself announced it on TV. The city will be 170 km long and like a thin strip. The city will no longer have roads for cars or other vehicles, but will have pavements for drivers. In this way there will be no road anywhere.

Conversely it will be a type of uninterrupted automated public transport. Saudi Arabia has allocated ₹ 500 billion for the Neom project. Due to the convenience of public transport, a person can get off by train-metro or other automated transport and reach his house on foot.

In this city with a population of up to one million, all facilities will be set up in such a way that anyone can walk for five minutes, whether it is a school or a hospital. One has to walk a maximum of 20 minutes to get any facility.

All facilities and jobs in the city will be connected to five-G internet. For this, artificial intelligence, robotic facility etc. will be widely used here. The project will span 10,000 square miles of vacant land on the Red Sea coast at the northwestern tip of the country.

Muhammad bin Salman does not usually make speeches on TV. But in a rare speech on the occasion, he said that 7 million people die every year from pollution. So now is the time to build cities as needed for the future. All the energy of the city will be renewable and completely pollution free.