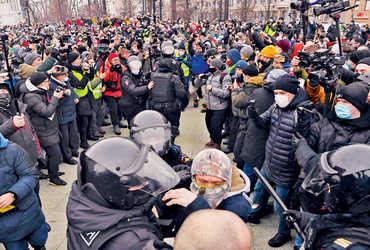 A total of 850 people have been arrested in connection with protests in more than 60 Russian cities demanding the release of Russian opposition leader Alexei Navalny.

Russian police arrested 850 protesters, who contemplate between zero and 50 degrees Celsius. Alexei Naval, one of the biggest critics of Russian President Vladimir Putin, was arrested soon after arriving in Moscow from Germany.

Navalny’s wife Yulia has also been arrested. Alexey has been undergoing treatment in Germany for the past five months. He accused the Russian government of poisoning himself.

Russian government officials say he has been arrested for violating the conditions of his release in a criminal case during a visit to Germany. Navalani, on the other hand, has stated that his arrest was made illegally. Navalani will be produced in court in early February where his sentence will be decided.