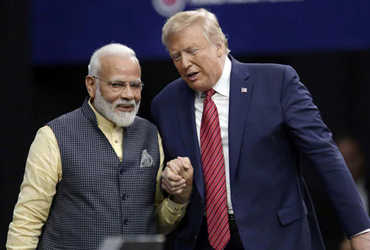 US President Donald Trump on Monday honored Indian Prime Minister Narendra Modi with the Legion of Merit Award. This honor of PM Modi reflects the strong relationship between America and India. In the last 4 years, the friendship of Donald Trump and PM Modi has also been very much discussed.

Indian Ambassador to the United States Taranjit Sandhu received the Legion of Merit from Prime Minister Narendra Modi. He was very happy to receive the award. The US National Security Council gave this information by tweeting.

As the US National Security Council tweeted from its official Twitter handle, President Donald Trump honored Indian Prime Minister Narendra Modi with a lease of merit for his leadership in advancing the US-India strategic agreement. In place of Prime Minister Modi, Ambassador Taranjit Sandhu accepted the medal.

During his tenure, US President Donald Trump has always insisted on strengthening relations with India. Meanwhile, the friendship between the two was also very much discussed. Be it Hobby Modi in America or Namaste Trump Program in India.