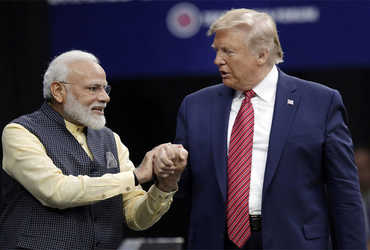 PM Narendra Modi tweeted, “I am very worried after getting information about riots and violence in Washington DC”. The transfer of power should take place in an orderly and peaceful manner. The democratic process should not be allowed to be influenced by illegal protests.

A shameful move by Britain’s PM

British Prime Minister Boris Johnson tweeted, a shameful move in the US Congress. The United States stands for democracy worldwide and it is now important that power be transferred peacefully and systematically.

Trump supporters attacked the US Congress

The US House of Representatives, both houses of the Senate, counted the votes of the Electoral College on Wednesday and sealed Biden’s victory. Meanwhile, hundreds of Donald Trump supporters gathered outside Parliament. The National Guard and the police tried to explain this. But some broke down the capital building and vandalized it in a big way. Meanwhile, a woman was shot and killed. However, it was not immediately clear who fired the shots.

What is the whole controversy?

The US president was elected on November 3, with Democratic candidate Joe Bidd receiving 306 electoral college votes and Republican candidate Donald Trump receiving 232 votes. However, Trump did not give up and continued to accuse him of rigging the election. Cases have also been filed by Trump supporters in some states, but the majority of cases have been rejected by the courts. Now Trump supporters have resorted to violence.