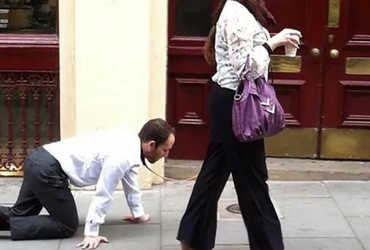 Quebec City, Ta. 13
A strange incident occurred in Quebec City, Canada. The curfew allowed her to go for a walk with the dog, the wife went out for a walk with a belt around her husband’s neck. When the police caught him, he said: “I brought my dog ​​for a walk.” Pictures of the incident have gone viral.
In Quebec Canada there is a curfew from 8 am to 5 am, but is allowed outside for medical emergencies or life necessities. It is forbidden to go outside after eight o’clock, but the dog is allowed outside for a walk.
After eight o’clock at night, a wife came out for a walk, instead of a dog, with a belt tied around her husband’s neck. The husband was walking on the road like a dog on all four and the wife was holding her rope in her hand. The couple was caught by the police and questioned. The wife said she took her dog outside and did not break any law. The police argued with her that he was not a dog, but the wife called her husband a dog and refused to pay the fine. At the scene, the husband was found lying on the ground like a dog.
Photos of the incident went viral after the news hit. The police took drastic action against the couple and fined them three thousand dollars i.e. about two lakh rupees.