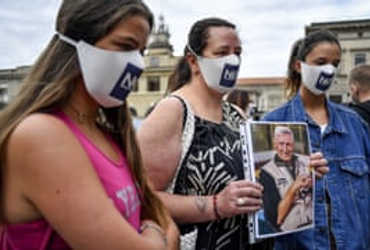 The corona virus, which spread from Via Wuhan last February, caused an outbreak in Italy. In the wake of Italy’s transition to the explosive Corona, many countries began to step in, including the lockout. At the time, the Lombardy Corona of Italy was in the news due to its infection and high mortality rate. Now social workers have announced legal action against the Italian government for negligence. Italy’s Prime Minister Giuseppe Conte, Health Minister Roberto Spernza and Lombardi Governor Attilio Fontana have been indicted for demanding 100 million in damages. The Corona epidemic in Italy has killed more than 30,000 people so far.

To demand compensation, the petitioners have created a Facebook page named Noi Denunasmero in which they criticize the government for failing to stop the broadcast of Corona. In the city of Bergamo in Lombardy, more than 200 people have filed complaints against the government. The Asala hospital in Lombardy was closed after an outbreak of the Corona virus. The hospital, considered a bastion of corona infection, reopened on February 8, 2020, as an opportunity for infection. The petition states that cities such as Aslano and Nembro were locked up long after the infection occurred. No plans were made at the local and provincial levels, despite fears of widespread outbreaks of the Corona infection. The first lockdown in Italy took place on 10 March, in which it was too late. Lockdown should be preferred where corona infection hotspots were.

If this had happened, the number of infections and deaths would have been less and Italy’s world-renowned health system would not have collapsed. At the time, the provincial and central governments were blaming each other for negligence in the lockdown. The organization, which is suing the Italian government, sees the move as a Christmas gift for the government. After four and a half months of corona infection in Italy, it gradually subsided in mid-July. Now that the second phase of the Corona infection in Italy is proving fatal, the lockdown is being replaced by a ban on celebrating Christmas.