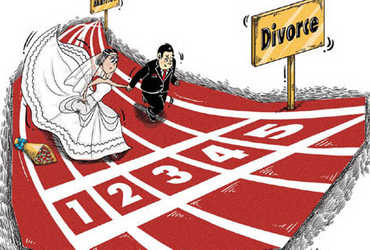 Divorce is a legal process. This happens in all countries of the world as we do in India. Then there is China, where there is now a queue of couples seeking divorce. Long lines take place outside offices for divorce. Online appointments are also full. Every couple is in a hurry to get a divorce. Everyone is trying to get a divorce before 31 December.

You may be wondering why this is so. So the answer is that the first civil code will come into force in China from January 2021. Which will change the rules of divorce. Simply put, it will be difficult to get a divorce after January 2021.

According to Chinese media, there are long lines outside divorce processing offices. The number of people coming for divorce has now doubled compared to before. The new civil code was approved by the Chinese Parliament in May this year. Critics of the new civil code say that the government has now taken away the freedom to divorce people. This will result in domestic violence.

Till now the divorce process in China has been quite simple. She will be approved within two or three days of applying for divorce. According to the new rules, couples seeking divorce must undergo a total period of six months. That is, if a decision is taken in anger, it can be changed. At the same time, perhaps living together can establish harmony between spouses.

The reason behind the change in divorce rules by the Chinese government is that the divorce rate in China has increased rapidly in recent times. In 2019 alone, 47 lakh couples got divorced. However most people are unhappy with the changes made by the government within the rules of divorce.