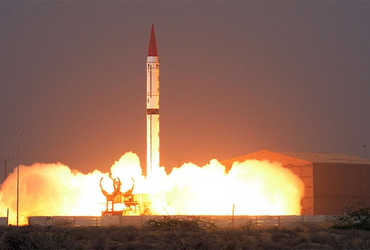 Pakistan on Wednesday claimed that the Shaheen-3 missile capable of carrying nuclear weapons was successfully tested.

For this, other leaders, starting with the Prime Minister of Pakistan, congratulated him for the test. However, this test has only been opened by a Pakistani leader. After the missile test, Baloch Republican Party spokesman Sher Mohammad Bugti said Pakistani missiles landed in Balochistan and five people were injured in the explosion.

Bugti, who had previously accused Pakistan of atrocities against the people of Balochistan, said that the Pakistani army had converted Balochistan into a laboratory. .

He said the missile was tested from Dera Ghazi Khan. “Typically, the missile targets an area where there is no one when it was in a residential area,” he said.

Pakistan said in a statement after the test that the range of the missile was 2700 km. It was re-tested to test its design and parameters.