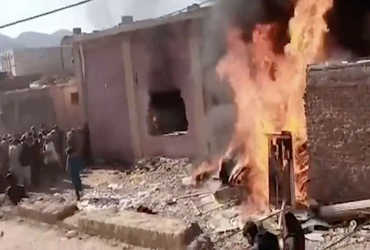 Police in Pakistan’s Khyber Pakhtunkhwa province have arrested 26 people in connection with the burning and demolition of a Hindu temple led by a cleric of the radical Islamic party, police said in an overnight raid.

Meanwhile, the Supreme Court of Pakistan, taking cognizance of this, heard the case on 5 January. On the other hand, the Hindu community of Pakistan condemned the incident and demanded stern action.

The incident in Karak district was condemned by human rights activists and Pakistan’s human rights minister Shirin Mazari, who tweeted condemning the temple fire and urged the police to arrest those responsible for the incident.

District police chief Irfan Ullah said that police raided the temple and detained several people in the case and eyewitnesses said that a mob of leaders of Jamiat Ulema-e-Islam attacked the temple, local Hindus repaired the temple Contacted local authorities for. It was attacked after being cleared.