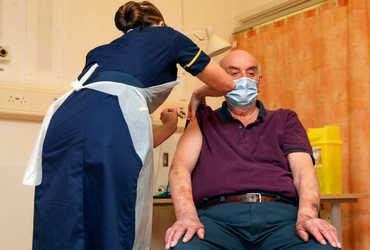 The vaccination of the Corona vaccine developed by Oxford University and AstraZeneca began in Britain on Monday. The first dose of the Oxford vaccine in the world has been given to 82-year-old Baron Pinker, who was born in Oxford. Brian has kidney disease, which is why he started dialysis. Brian Pinker has been vaccinated at Oxford University Hospital. Which is considered to be a milestone in the National Health Service vaccination program.

The Oxford vaccine is the second corona vaccine approved by the UK. Vaccines developed by Pfizer-Bioentech have previously been approved there. Oxford-born Pinky had been suffering from kidney disease for the past several years, due to which she was undergoing regular dialysis. After being vaccinated, he said he was happy to protect against the corona virus. Now they will be able to get treatment without any worries.

“I’m just happy to take the Corona vaccine,” he said. At the same time, there is a sense of pride as this vaccine has been developed inside Oxford. Colette, 88-year-old music teacher and Oxford University Hospital pediatrician Andrew Pollard, has also been vaccinated against Corona.

British Prime Minister Boris Jones said, “The vaccine developed by Oxford is a victory for Britain’s science world.” I thank everyone involved in the development and production of this vaccine. I know that we have many challenges. But I trust that this year we will be able to defeat the corona virus and sit again.