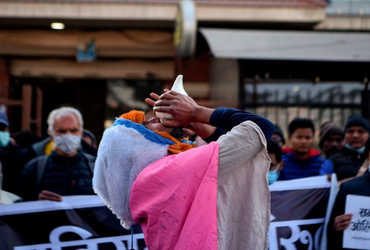 (PTI) Kathmandu, Ta. 28
China has been active since the political crisis in Nepal. Oli has dissolved Parliament after differences between Oli and Prachanda grow. Prachanda has joined the ruling party. Amidst all this, China is trying to gain a foothold in Nepal.
The ruling party of Nepal is divided. The issue has now reached the Supreme Court. There is resentment in Nepal over dissolution of Parliament and growing opposition to the decision. Meanwhile, people became more angry when China started interfering in Nepal’s political crisis.
Jinping’s delegation met Pushpa Kamal Dahal-Prachanda and former Prime Minister Madhav Kumar. Jinping’s delegation led by Chinese Communist Party leader and Deputy Minister Xu Yozu has camped in Nepal. Chinese representatives met with Communist Party leader Prachanda and former Prime Minister Madhav Kumar on this issue.
Representatives who brought Jinping’s message advised Prachanda and Oli to resolve internal differences by discussing them properly. China, which wisely advises to resolve differences in the interest of the country, is actually trying to strengthen its grip on Nepal even in such a political crisis. China wants to strengthen diplomacy in Nepal by pretending to be an ally.
But the people of Nepal do not approve of this. Citizens of Nepal opposed the Chinese delegation. People outside the parliament were angered by China’s intervention. People carried banners and shouted slogans outside Parliament and returned to the Chinese delegation. Not only this, people also demanded to return the land of Nepal which was confiscated by China.
Citizens of Nepal also rallied outside the Chinese Embassy. Outside the embassy, ​​people raised slogans to call back the delegation.