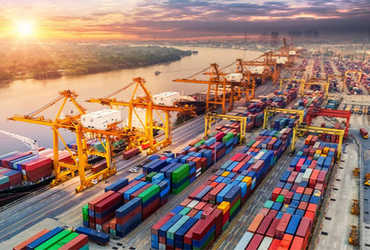 Corona’s sub-center is China, and the US and European countries, including India, will cut back on Chinese goods and imports from China, and gradually impose trade-economic restrictions, saying that China is conspiring to destroy the world economically is. His fuss is over.

The boycott of China’s goods, services, parts or job by world countries will see India as an alternative and as all aspirations and goals that India has become part of the manufacturing process of the world’s units.

By June, companies and industries in the United States, Europe and Asia as well as Africa had realized that if they boycotted China, they would be put to death, as India, Taiwan, Hong Kong, Korea or No other country in the West will drop mass production like China. It is not possible to break the chain of power.

It happened that a record has been set for ordering the repatriation of finished products of parts, Chinese products, as well as foreign equipment made after job work.

Containers for export were booked more than three times in the year 2020, which was booked for import by China. Shipping companies around the world have not been able to meet the demand for containers. After June 1, the rate at which goods are shipped from China to the United States in a 40-foot container ship for packaging and shipping final products is 49 4,928, an increase of 85 percent.

India had a good opportunity to gain a significant share of China’s job work and market when there was global resentment against China from March to June. Prime Minister Modi also chanted the mantra of ‘self-reliance’. The world’s top companies also showed interest in job work but India failed to streamline production and supply chain. India also lost an invaluable opportunity to provide employment to the youth of the country.

Shockingly, India’s exports fell 9 percent in November. China achieved a global trade surplus ($ 460 billion) in 2020 out of India’s total annual exports. On the other hand, India received 75 billion surpluses in bilateral trade with China with the US.

China is moving towards achieving its 2025 targets by 2022-23. China’s Supremo Jinping is now putting a brake on the disproportionate distribution of wealth and is tightening the nerves of the country. China’s per capita income is 4,000 000 but 600 million people earn only 140 140 per month. Jinping’s next goal is to reduce inequality.