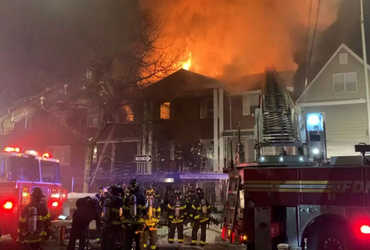 In India and other countries, a fire broke out in the ICU ward of Corona Hospital in which Corona patients died. Something similar happened in Turkey when patients admitted for corona treatment survived the epidemic but succumbed to ashes.

The incident occurred at Sanko Uni in Gaziantep, southern Turkey, 850 km from Istanbul. Became in hospital. A statement from the hospital said the dead included 56- to 85-year-olds. According to the statement, 14 patients undergoing treatment in the ICU were transferred to another department.

An investigation into the incident was launched. Health Minister Fehruddin Koka tweeted that nine people were killed in the blast. However, hospital officials put the death toll at eight. No discrepancies between the figures were disclosed.

The Governor’s Office said a terrible explosion occurred at 4:45 am as the pressure in the oxygen cylinder increased. No other coin was injured except those killed. A government statement said that the current coronavirus epidemic has a capacity of 74 percent beds in Turkey’s ICU.

However, the Medical Association said that the death toll could be even higher. The number of corona patients in their hospitals is increasing. As of Friday evening, there were 26,410 new Corona cases. At the same time, the number of corona infections in Turkey reached 19.8 million, including symptoms without corona.