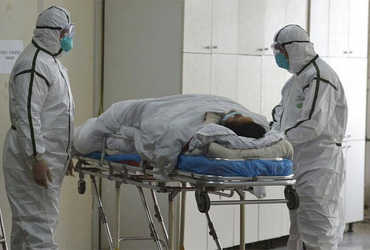 A new type of corona virus has killed a record number of patients in the UK in a single day. British Health Minister Matt Hancock recently said that a new type of corona has emerged in the country. On the other hand, China has provoked questions over its corona vaccine. He has now said that there is no other option than to use our vaccine to defeat Corona.

According to the UK Ministry of Health, a total of 744 corona patients died in the country on Wednesday. For the first time since April 2020, a large number of Corona patients have lost their lives on a single day in the UK. The death toll from Corona in the UK has risen to 69,157, with more than 21.55 million cases of corona.

According to data from Johns Hopkins University, the number of corona patients in California has exceeded 20.10 million. The death toll here is 23,651. The Corona vaccine, on the other hand, is in the process of being approved for immediate use in many countries affected by the epidemic. Several countries, including the United States, Britain, China and Russia, are in the race to find a vaccine for Corona. Britain is the first country in the world to allow the use of the Corona vaccine.

At this time, the Corona vaccine developed by China and Russia is being questioned. However, angered by this issue, China boldly said that if the corona is to be defeated, the world should use the Chinese vaccine. The Chinese government’s publicity newspaper Global Times pulled up countries questioning China’s corona vaccine.

China has accused Western countries of raising questions about transparency in China’s vaccines. On Thursday morning, by the time of China, the Butane Institute of Brazil reported that more than 50 percent of China’s syrup corona vaccine is effective.

The Global Times questioned the US vaccine, saying that the US Pfizer vaccine was designed to be used in rich countries rather than developing countries. There are also side effects of this vaccine, which have not received the attention of Western media. Instead of the newspaper Synovac praising its own vaccine, China’s Synovac vaccine is safe and can be easily stored at refrigerator temperature.

The vaccine is designed for developing countries and has a low cost, but the Western media is ignoring these features. Also, there have not been any serious accidents in China’s vaccine trials. A total of 7,89,36,951 or 7.89 crore cases of corona were reported in the world, while a total of 17,35,131 deaths i.e. 17.35 lakh deaths.