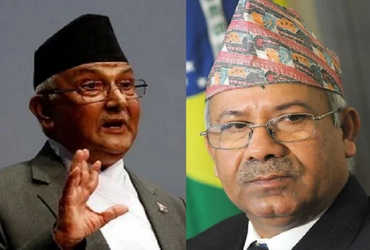 Pushpadkamal Dahal “Prachanda” faction of the Communist Party of Nepal removed Prime Minister KP Sharma Gali from the post of party president in a central committee meeting on Tuesday. Tha, a new committee consisting of 1199 members was formed.

In the Central Committee meeting, Prachanda’s new faction appointed senior party leader Madhav Kumar Nepal as the second president. A total of 315 members of the Central Committee voted in favor of Madhav Nepal. He will lead, he told the Kathmandu Post, that Oli has been removed from the post of president for working against the party.

As the power struggle between Oli and former Prime Minister Prachanda has been going on for a long time, Koli had recommended to the President to dissolve Parliament, Oli is believed to have taken this step to get a majority in the Central Committee.