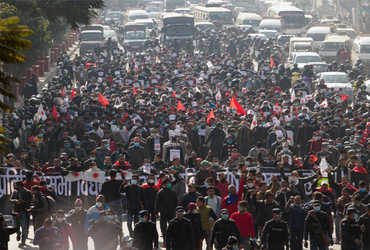 Meanwhile, China’s interference in the political crisis in Nepal has fueled widespread protests, with people protesting against the Chinese delegation in the capital Kathmandu and in various parts of the country.

People angry at China’s increasing interference in Nepal demonstrated on the road in Kathmandu on Monday. The protesters shouted slogans against China. The protesters put up anti-China posters and banners. The posters called for an end to Chinese intervention in Nepal.

Chinese President Xi Jinping’s special envoy Guo Yeojo is in Kathmandu. He will try to reach an agreement between two opposing groups of the Communist Party of Nepal, Prime Minister KP Sharma Oli and Pushpa Kamal Dahal aka Prachanda.

The newspaper said China’s move was seen as an attempt by Beijing to obtain information about the state of the land. Vishnu Rijal, vice-president of the Department of Foreign Affairs of the Prachanda faction of NCP, said that the Chinese side had discussed the visit to Kathmandu. But I do not have the information to tell more. When asked about this, the Chinese Embassy in Kathmandu did not respond to a phone call.

Meanwhile, in view of the political developments in Nepal, the government led by Prime Minister KP Sharma Oli has recommended the President to convene a winter session of the Upper House of Parliament from 1 January. The move comes a week after President Vidya Devi Bhandari dissolved the lower house of parliament.

In fact, the merger of Oli-led CPN-UML and CPN-Maoist led by Pushpa Kamal Dahal (Prachanda) gave birth to the Communist Party of Nepal in 2018. Seven ministers of the Prachanda faction resigned their posts after dissolution of the House of Representatives.