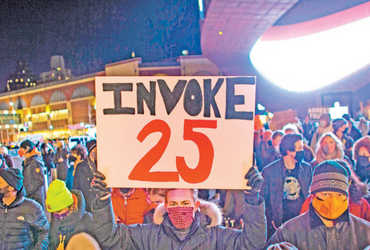 Trump supporters committing violence in parliament will be punished

Biden’s oath not to be included: Trump’s ‘footsteps’!

US President Donald Trump on Thursday accepted a political end after provoking supporters to attack the US parliament, the last act of his reign. Democratic lawmakers have increased pressure on Vice President Mike Pence’s cabinet to remove President Trump with immediate effect following the attack on the US Congress. Speaker Nancy Pelosi said that Donald Trump could not remain president for a single day after the attack on Parliament.

Barely 12 days before US President Donald Trump took office, Speaker Nancy Pelosi has warned the Trump cabinet that if Vice President Mike Pence and the Cabinet do not remove Trump from power with immediate effect, the parliament next week against Trump Will take another historic step. Will consider carrying.

Questioning his second impeachment proceeding, demanding his resignation, resignation of fellow ministers, possible legal action to provoke supporters, and questions about his mental state, President Donald Trump lost and lost the election on Thursday. President-elect Biden indicated readiness for the smooth running of power. Meanwhile, the death toll has risen to five after a police officer was killed in an attack on Parliament. On the other hand, federal authorities have begun an investigation into the possibility of filing a case of treason against Trump supporters.

Thirteen days before he left the US presidency, Donald Trump finally accepted the election result out of pressure from Republican lawmakers and fear of impeachment, and agreed to a smooth transfer of power to President-Elect Joe Biden.

Even after Democrats officially acknowledged Biden’s victory in a joint session of parliament, Trump said he was ready to hand over power to Biden “by law”, although he did not accept the election result. However, the pressure on Donald Trump for an electoral defeat and smooth transfer of power increased against the attack of his supporters on the US parliament.

His voice did not have the same enthusiasm as his supporters at Wednesday’s rally, provoking him to attack Parliament by calling him ‘We Love Love’. In a new video message the day after calling on his supporters to march on parliament, Trump said that the United States has always been a law-abiding country. Like all Americans, I strongly condemn violence and attacks on Parliament in violation of the law.

I immediately sent the National Guard to the Parliament complex and ordered them to secure the building and take out the intruders. Trump’s recorded video message was posted to YouTube and released by the White House. Trump said protesters who broke up in the US Congress would have to pay the price for the attack.

Police said that meanwhile, US Capitol Police Officer Brian D. Siknik was injured when Trump supporters attacked Parliament. So he returned to his divisional office. However, he died of his injuries on Thursday. The death toll from the attack on Parliament rose to five.

On the other hand, federal prosecutors in the District of Columbia have begun exploring the possibility of a sedition case against their supporters, including President Trump, who incited the mob to attack the US parliament. US Attorney Michael Sherwin of Washington DC said prosecutors are preparing to file more than 15 lawsuits and steal property against Trump supporters in the parliament complex.

In addition, more evidence will be found in the near future. More than 90 people have been arrested in connection with the attack on Parliament in Washington, and the arrests are likely to last longer. In addition, US companies have identified the attackers and have opened fire on them to attack Parliament.