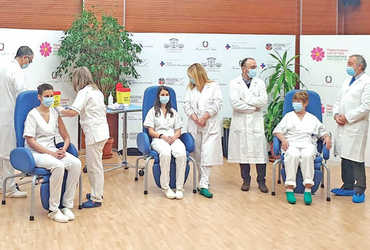 ‘Left-wing’ vaccination across Europe to combat the epidemic: first stage vaccination of health workers and the elderly

The entire European Union is now on the left to recover from the Corona epidemic, and vaccination across the continent begins today. In the first phase, health workers and the elderly will be vaccinated.

The vaccine, manufactured by American pharma company Fyder and German pharma company Bioentech, arrived at various EU hospitals packed in super cold storage from a Belgian factory on Friday. In the first batch, all countries are given adequate and low vaccine stock. All countries have been given less than ten thousand vaccines.

The second dose will be given after three weeks to all those who have been vaccinated today. Ursula von der Leyen, head of the European Union’s Executive Commission, says the European Union has more stock of vaccines than any European citizen in 2021.

Claudia Elinarini, a 29-year-old nurse who received her first vaccination at the Infectious Diseases Hospital in Spalanza, Rome, says she is today as a citizen and also to represent health workers. I want to spread the message on behalf of health workers that we believe in science. Austrian President Sebastian Cruz has said that the vaccination campaign will be a game changer. This is not the end of the epidemic but the beginning of our victory.

More than 1,60,00,000 people have been infected and 33,600 people have died in over 27 EU countries. All countries including Spain, Italy, Czech Republic have been killed by this corona. At the beginning of vaccination today, many heads of state and government leaders took a dose of the vaccine and conveyed that vaccination is the only remedy and that the method is safe.