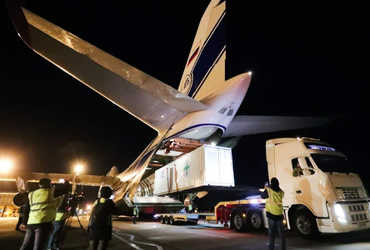 – Each of the three oxygen generators is capable of producing 500 liters of oxygen per minute.

Many countries around the world are coming forward to help India tackle the corona virus epidemic. His research flew the world’s largest cargo plane with a 3 tonne oxygen generator of 18 tons and 1000 ventilators, from Belfast in Northern Ireland to India. The British Government (UK) itself has informed about this.

According to the Foreign, Commonwealth and Development Office (FCDO), airport workers worked hard all night to load life-saving drugs in the giant Antonov 124 aircraft.

With the help of the Indian Red Cross, Indian hospitals battling the Coro crisis will be supplied from the UK. Each of the three oxygen generators is capable of producing 500 liters of oxygen per minute. Which is enough to use 50 people at once.

Northern Ireland’s Health Minister Robin Swann was present at Belfast Airport when the equipment was loaded onto the world’s largest cargo plane. According to Robin Swan, it is his moral responsibility to give all possible help and support to India.