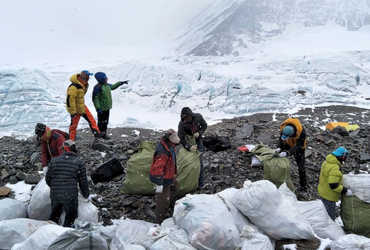 To survive in a difficult situation, things have to go by hand. Over the years, the influx of tourists visiting Mount Everest has led to the accumulation of various scattered items and debris from bottom to top, including oxygen cylinders, tent debris, ropes, water bottles and plastic items. The waste thrown in extremely cold weather due to snow remains in that form. Last year, 11 tonnes of waste was collected by the Sagarmatha system of the Government of Nepal. Safe disposal of waste is also being considered to prevent tourists from generating garbage.

Everest Next Center is located at an altitude of 30 meters. This place is similar to the entrance to Everest. Due to Corona, only a limited number of locals will be granted entry in the near future. Secondly, the waste will be displayed in an artistic way to raise awareness about the environment. Its purpose is to draw attention to the garbage dumped on the way to Mount Everest.