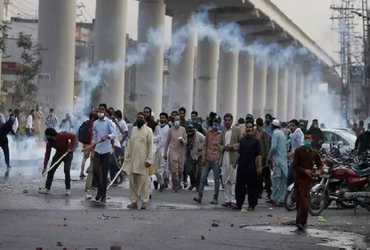 The situation in Pakistan has worsened since the arrest of the leader of the radical Islamist party. War-like conditions have arisen in Pakistan following violent protests in many parts of the country. The protesters blocked roads in several cities, including Karachi, the country’s largest city.

In fact, protests have been going on for the last few days demanding the expulsion of the French ambassador to Pakistan for some blasphemous publications, during which the government banned the performance of the protesting radical Islamic Tehreek-i-Lubic Pakistan (TLP) Had given.

According to news agency ANI, riots escalated after the arrest of the leader of an Islamic party in Pakistan. Many cities including Lahore and Rawalpindi were hit by the explosion. On the social media reports, a user there said that there is a war-like situation in Pakistan. The situation in Pakistan is out of control. Millions of people have taken to the streets against the Imran government and army.

Tehreek-e-Labbak Pakistan president Saad Rizvi was arrested on Monday if the government threatened to stage a nationwide protest if he did not expel the French ambassador for publishing a photo of Prophet Mohammed, following which police They have been arrested. .